How does it work?

Organize a team of 4 persons and register via the registration button above (max. 8 teams allowed, so be quick). You will then compete on various surfaces (sand, grass, gravel, ...) to become the best Mölkky team of the year.

A team will only be as strong as the average of its individual players; due to a nifty push-through system, everyone will have to play (and root for) an equal amount of games (this system is explained on the day itself).

Food and drinks are provided. A small contribution of 5€/player is required for this purpose.

Mölkky is an outdour game which consists of 12 wooden pins (numbered 1 to 12) and one wooden throwing pin – the Mölkky. The aim of the game is to score exactly 50 points by knocking down pins with the Mölkky. Knocking down one pin scores the amount of points that is marked on the respective pin. Knocking down two or more pins scores the number of pins that were knocked down. The pins are close together in the beginning of the game. When a pin has been knocked down, it is stood up again exactly where it landed; this way the pins are scattered across the terrain as the game progresses. He/she who first scores 50 points is the winner, he/she who fails to score 50 points is the loser.

How do we play Mölkky?

The 12 pins are placed on the playing field. These must be positioned in a triangle shape with one of its corners facing the launching zone. In the first game this is done by a volunteer; from then on the winner of the previous game has to place the pins. He/she who sets up the pins chooses its distance from the launching zone and the order in which they are placed. However, it is recommended not to put the high numbers (10-11-12) too close together.

The position of the launching zone is agreed upon and indicated. From within the launching zone, players take turns in knocking down the numbered pins. In the first game the order of the players is chosen arbitrarily. After the first game, each game is started by the winner of the previous game, followed by the second, third, fourth, etc. The Mölkky must always be thrown underhand.

Pins that have fallen down will be put stood up again right where they fell; this way the pins will get scattered over the terrain during the course of the game, which makes it easier to knock down individual pins. Pins may be stood up again anywhere on the entire side where the pin touches the ground.

The first one who scores exactly 50 points is the winner. The other players continue playing for further rankings. The unfortunate individual who fails to score 50 points is the loser and may subsequently be punished by an assignment (usually dishwashing or cooking). The winner of the game must collect the pins and setup the next game.

To make the game more difficult or fun, Billy's may be placed in the playing field. These are longer narrower pins with no points marked on them. Two or three Billy's can be used, where the third Billy is the Superbilly (this one is marked with a cross). If a Billy is knocked down (also Billy's have to touch the ground completely), your points are halved. If numbered pins are also knocked down in the same throw, they will be added to your score before it is halved. For example, if you are at a score of 28 points, and you knock down 3 numbered pins and a Billy, you end up with a total of (28 + 3) / 2 = 31/2 = 15 points.

Mölkky is a Finnish game 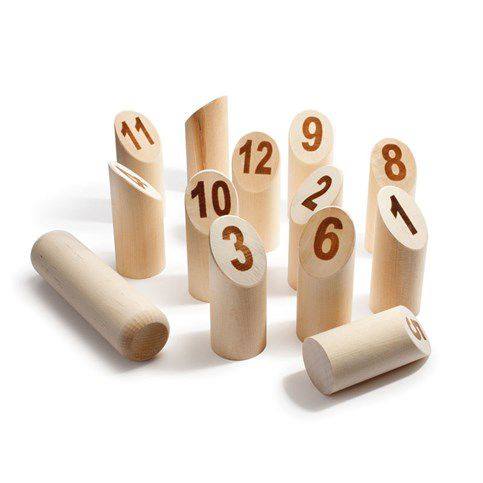 Mölkky is a Finnish game. It is a simplified version of the ancient Kyykkä.

Mölkky can be played on different surfaces, where each surface requires different tactics. For example, on sand precision will be important, while on grass power and chance are key factors for your game's success.

Mölkky is very tolerant: everyone can play along, regardless of age, gender, orientation, race, faith, eye color, number of toes etc. Only persons without arms are not allowed to participate (they are allowed to root for other players).

Do you have questions or remarks?